NOTE:
Ladies and Gentlemen, I have run out of dignitaries that I would like to write letters to, and am thus starting a new series. This will still be satirical, the only thing I know. As you may have guessed, I try to find humor in most, if not all, situations. Some of you have called it many other names, some not so nice and others outrageously funny (“author was drunk while writing” was my favorite). I do confess I have 5-10 things that I enjoy in life and drinking and writing are there in those 10. Sometimes, I have done the two together (drinking and writing). The results have been hilarious! With that said, welcome to the new series, The K File.

For any country to prosper, there are certain things that are needed. In fact, I have heard that the current PM of Pakistan, Imran Khan Niazi, is writing a book titled “Immi Days: Domestic Economic Prosperity In 30-Days”. Yeah, I know! I was shocked too! He can write? Anyways, somebody mailed me the foreward of the book and I figured, you should read it, along with me, and prepare to get enlightened by the genius, that is Immi!! (Read as: Why should I be the only one to suffer?) Anyways, here it goes:

For any country to prosper, it primarily needs an educational policy. My parents emphasized a need for a good education. When I couldn’t find any local educational institutions that could tap my immense intelligence, I decided to apply to Oxford and Cambridge. The idea was if I was going to be declined by any educational institution, it had to be an elite institution. Believe me, when I say I was shocked to find out I was actually accepted by Oxford (not to be mistaken for the Oxford Jamie Milia Madrasa in Islamabad, but the one in England, right next to Germany and Japan)!! I had already gotten to know that my Maadr-e-Watan (motherland) needed excellent economists for a good future, so I decided to major in Economics.

Over the next 4 years, apart from playing cricket (a sport I played to keep myself from missing Pakistan) and one or two dates with some girls, I focused on my education and graduated with very high scores. My professors were highly impressed with my geography and economic knowledge; the very same knowledge that I use today to set my country towards economic prosperity and parity with the likes of the USA (In my opinion, India is not a country that I would like to emulate since I see their economic model as flawed).

I vowed right then that I would ensure my country would have world-class educational institutions for higher learning; we call them the IIT – Islamia Institute of Technology, an educational giant whose model has been copied by India when starting the IIT (Indian Institute of Technology). The curriculum, as I suspected, was a little different at the “institutions” in India, with an over-emphasis on areas not related to daily life; the IITs in my country offered degrees in real-life necessities (BAM, Bachelors in Arms Manufacturing, BBM – Bachelors in Bomb Making, BSA – Bachelors in Suicide Attacks [there is no Masters level in this – for obvious reasons] and many other such technical degrees). The IITs in Pakistan have now been renamed as Madrasas, to avoid any confusion with India’s IITs, and are still involved in real-life education for every Pakistani citizen. They are now world-famous and are attracting students from other countries, generating revenue for the country.

The education at these world-famous madrasas makes the students very tolerant. The students are taught to tolerate the minorities as long as the minorities become a part of the majority and in order to come up with any kind of valid policies, we need to understand what our clergy defines as an education. Just like America and the West are governed by the church and the seminaries, Pakistan is governed by Islamic scholars and the Madrasas.

Education just like the western countries that ensure the safety of other religions, the government of Pakistan is ensuring that the other religions (Hinduism, Christianity, Sikhism) are protected. Unlike India, where minorities are at risk, the Pakistani constitution allows for minorities to be elected to positions of power, including the highest positions in the country (unfortunately, none of the minorities have qualified given the strict educational requirements).

It must be remembered, that for an autonomous country, the most important aspect that underlines the word, autonomous, is an economy that is booming. Pakistan has made full use of one of the basic tenets, that define the real-estate industry. That is, Location-Location-Location. We are so well placed that NO COUNTRY IN THE WORLD can ignore us (Author’s note: True, Immi. Even America, that hasn’t called you and has ignored you, will talk to you at some point. Similarly with France and the rest of the EU). Our economy has been called an artificial economy, with an over-reliance on grants and soft loans from various western countries. THAT’S ABSOLUTELY FALSE! We had manufacturing units in our country that were responsible for a lot of our revenue. However, where billions of dollars are involved, there is always the chance for mismanagement; that is exactly what happened.

In the late 70s, when the, now nonexistent, USSR invaded Afghanistan, an opportunity was created by, our then allies the USA. We had to mobilize forces and create a mujahadin force that would make the USSR retreat. This, in economic terms, is called Supply and Demand. The USSR helped create a demand for the mujahadin and we were more than willing to supply the people. At a cost. That America was ready to pay us. And did.

Some pseudo-economists keep throwing Malthusian economics in my face (Author’s note: Malthusian economics states that increase in the production of food is directly proportional to any growth in population) and stating that, “Pakistan has made a mockery of all economic theories”. What they don’t understand is, because Malthusian economics doesn’t work with a complex country like mine, we follow a hybrid model (we took some of the Marxist economics and some from Market Socialism). While people wonder whether this model or for that matter any model would work, I posit that no economic theory has shown immediate results. People will be hailing me as an ECONOMIC GENIUS, ten years down the line.

In a global economy, a foreign policy that is all-inclusive is needed. Our foreign policy has always been well defined: We are friends of those who will help us survive. Till about 8 years ago, the USA was our friend and gave us immense amounts of money. This kept our economy floating. We were doing better than India. And then Modi happened. While claiming to be a globalist, he has actually turned out to be a murderer! He is now murdering the people of my great country by starving them. He is taking Pakistani jobs away from the middle-east and is successfully taking our friends away from us in the OIC.

In fact, I would go so far as to say that he is responsible for turning the Organization of Islamic Countries into the Organization of Indian Colonies. Let’s be honest: What has Modi got that I don’t? I am much better looking than he is, more popular than he is, have fan clubs around the world, and more women throwing themselves at me. I’m a legend who has more fans in India than anywhere else in the world. To now be expected to take a back seat to some short “leader” who can’t speak a word of English nor carry himself with the dignity needed (why would any PM hug the President or PM of another country? Dignity is needed which I bring). In addition, when I speak, people know a true leader is speaking, while when Modi talks, it sounds like someone begging for votes!!

I will continue my efforts to rid my country of corruption and will bring this very educated society to the forefront in the eyes of the rest of the world. 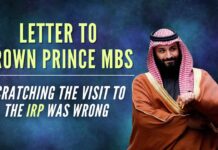 My New Letter Series – Dear Crown Prince MBS, Scratching The Visit To The IRP Was Wrong