[dropcap color=”#008040″ boxed=”yes” boxed_radius=”8px” class=”” id=””]I[/dropcap]n an earlier article in this site we had raised apprehension about attempts to hush up the murder case of Sunanda Pushkar, the wife of Ex-cabinet minister Shashi Tharoor in the earlier UPA government.

Delhi Police Commissioner B.S. Bassi on Wednesday [11th November] said that the U.S.’s Federal Bureau of Investigation’s lab report of Sunanda Pushkar’s viscera samples has ruled out polonium or any other radioactive poisoning as the cause of death.

Reports suggest that the Delhi police has received by E mail- the viscera report from FBI -USA.Interestingly Viscera samples were sent to US after AIIMS doctors had said that Indian labs lacked facility to identify the poison which caused her death.
Delhi Police Commissioner B.S. Bassi on Wednesday [11th November] said that the U.S.’s Federal Bureau of Investigation’s lab report of Sunanda Pushkar’s viscera samples has ruled out polonium or any other radioactive poisoning as the cause of death.
Radiation levels in the samples were found to be well within the prescribed safety limits, said Mr. Bassi after receiving the FBI lab report.
[dropcap color=”#008040″ boxed=”yes” boxed_radius=”8px” class=”” id=””]A[/dropcap]sked about the possibility of Ms. Pushkar’s husband and former Union Minister Shashi Tharoor being questioned again in connection with her murder case, Mr. Bassi said that if the investigating officer felt the need to do so, it would be done.

The samples were sent to the U.S. after traces of radioactive isotopes were found in her body during the post-mortem examination. On the police’s next move, Mr. Bassi said the reports would be sent to the medical board examining the death.
Asked for his opinion on the latest development, Dr. Sudhir Gupta from the Forensic Department of the All India Institute of Medical Sciences said: “We will be in a position to say anything about the report only after we examine it.”
The FBI lab report, received from the U.S. via email late last month, has put an end to all speculation about polonium poisoning but sources claimed that it also mentioned the name of the poison which caused the death. The name of the poison would now enable the Special Investigating Team to know how it was procured and administered into Sunanda’s body.
[dropcap color=”#008040″ boxed=”yes” boxed_radius=”8px” class=”” id=””]D[/dropcap]elhi Police spokesperson Rajan Bhagat said the report would now be sent to forensic experts in the national capital. Only after this, further investigation would be carried out.
Well known journalist who broke the 2G scam J. Gopikrishnan of Pioneer paper in a series of tweets questions the need to send the report to the FBI when it is known that the findings by FBI may not stand the test of scrutiny in the Indian courts. Plus due to this action precious nine months have been wasted.
Also note that Delhi police have been very lackadaisical in treating this murder case. Rather they have treating it as some pick pocket problem. Now they are suggesting that the FBI report has to be examined by the investigating officers to come to conclusion.
The associated issue of Involvement of Sunanda with IPL financing has not been fully investigated.

This IPL, which is a scam is also a curse – since many who are involved with IPL are getting exposed for betting/money laundering/forex violations etc.

Sunanda as we noted earlier was to give a presser on the day of her murder. 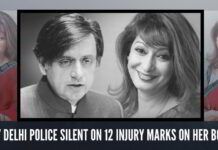 Delhi Police tells Court they have considered Vigilance Report in Sunanda Charge-Sheet. But why silent on 12 injury marks on her body?

Why is Income Tax not acting against controversial singer Vishal Dadlani,...